The World Health Organization acknowledged for the first time on Thursday that COVID-19 may spread through the air.

The group’s shift was prompted a growing body of research suggesting that coronavirus-laden aerosols — tiny particles produced when a person talks, coughs, sings, or exhales — can linger in the air and travel more than 6 feet from an infected person.

More than 200 scientists recently sent a letter to the WHO suggesting a few ways to limit this kind of airborne transmission: In addition to improving ventilation and reducing crowds in indoor spaces, the scientists also proposed using ultraviolet light to remove virus particles from the air.

UV light is already used to kill viruses, including human coronaviruses, in hospitals and laboratories. But not all UV light is the same, and the kind that’s best at killing coronaviruses is also the most dangerous for people. So Researchers at Columbia University came up with a way to harness this light without allowing it penetrate skin cells.

“We do, I think, have a potentially new and powerful weapon in our fight against this terrible virus,” Dr. David Brenner, who is spearheading the research, said at the TED 2020 Conference on Tuesday.

Brenner’s research, published in the journal Nature in June, suggests that 25 minutes of continuous exposure to his modified version of UV light could eradicate 99.9% of human coronaviruses in indoor environments. The novel coronavirus should be no exception to this rule, he said.

Not all UV light kills coronaviruses

The three main categories of UV light are UVA, UVB, and UVC. Hospitals and transit systems rely on UVC, which is the most dangerous to humans, to extinguish pathogens. UVC light damages a virus’ DNA or RNA, thereby preventing it from multiplying further.

But exposure to UVC light can irritate our skin, damage the cornea in our eyes, and increase our risk of skin cancer. In nature, UVC gets completely absorbed by the ozone, since it has the shortest wavelength of the three types — meaning humans aren’t exposed to it naturally.

That’s why the MTA uses it to clean the subway at night, when trains aren’t in use.

“Come five in the morning, you have a nice clean subway car,” Brenner said. But by the end of the day, he added, “the effects have probably more or less gone away.” 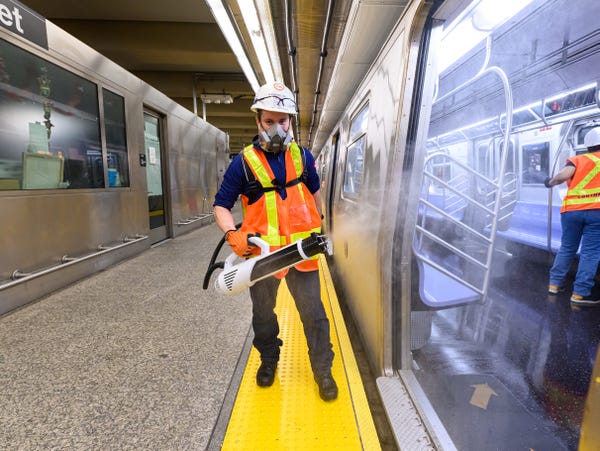 Neither of the other two types of UV light are particularly useful as disinfectants. UVA, the kind with the longest wavelength, is often found in tanning beds and can cause wrinkles. UVB is linked to sunburns and skin cancer.

“UVA and UVB kill a little bit of viruses and bacteria, but not much,” Brenner said.

His team thinks they’ve found a way to make UVC light safer for humans. The solution is a much shorter wavelength of UVC light — called “far-UVC” — that won’t penetrate the barriers on our eyes and skin. Since viruses and bacteria are much smaller than cells, the light can still destroy these pathogens.

Far-UVC could still have damaging side effects

Brenner said his research was inspired by a friend who died of a drug-resistant bacterial disease.

“I was thinking long ago, is there anything physics can tell us to try and stop this problem?” he said. “Two or three years ago, the penny dropped that we could actually use this for viruses, too.”

Before the pandemic, Brenner’s team was testing far-UVC light on seasonal influenza.

“It became immediately apparent to us that the ideas we had for influenza were going to be applicable to COVID-19,” he said. 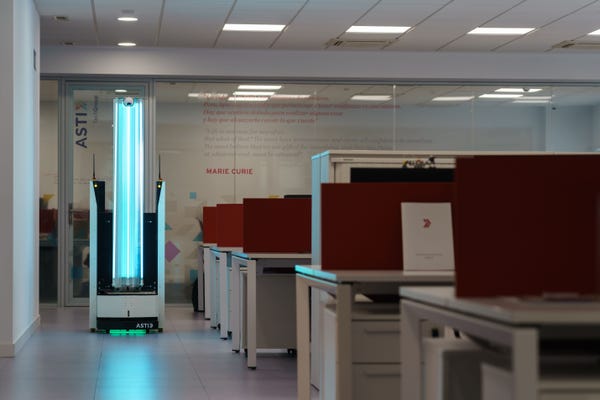 A robot disinfects a room with ultraviolet light in Madrigalejo del Monte, Spain, on May 12, 2020. Cesar Manso/AFP/Getty Images

Some scientists still question the safety of the practice, however. The research is nascent, so it’s possible that long-term exposure to far-UVC light could cause cataracts or skin cancer.

“My excitement [is] tempered with the concern that it could be an application that could have some dangerous side effects or direct effects,” Karl Linden, an environmental engineer at the University of Colorado Boulder, told Discover Magazine.

But Brenner said studies over the past five years haven’t found far-UVC to be dangerous to humans in limited quantities.

“There are limits as to how much UV light at any given length we can be exposed to,” he added.

Far-UVC lights could be installed in airports and restaurants

Brenner said at TED that he envisions far-UVC light being incorporated into standard indoor lighting. That would mean any restaurant, airport, office, or school could use overhead lamps to kill off pathogens while simultaneously illuminating a room. Bigger rooms would require more lamps, he added.

“If it’s a small room or an elevator, for example, you’d definitely only have to have one light,” Brenner said.

Brenner said the technology isn’t designed for individuals to purchase for their homes. But he predicted that far-UVC lights might be widely available for use in public or commercial spaces by the end of the year.

“The whole point is to keep killing the viruses as they’re being produced — as people sneeze and talk and cough and shout,” Brenner said. “The lower the level of virus in the air, the less chance there is that it can be transmitted from one person to another.”